Skip to content
By: Cythia D. Vanvalkenburg Posted on May 4, 2022 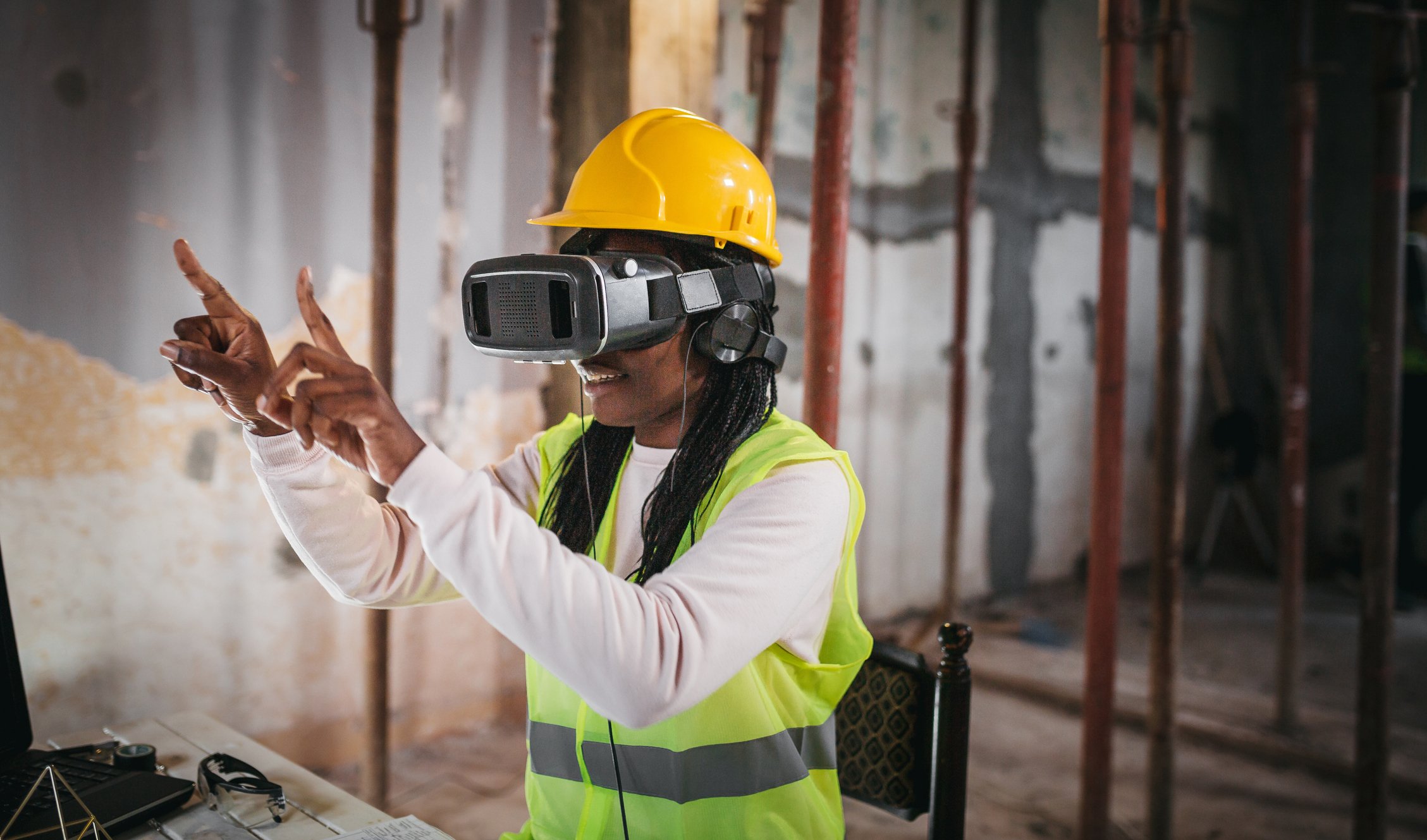 There has been a lot of talk recently among tech companies about the future of the internet, leading to an ill-defined buzzword, “metaverse,” dominating news cycles and being discussed everywhere, from tech magazines to mainstream media.

Some companies have changed their entire business in its name, looking to use retail space to sell physical hardware as a catalyst to a digital world.

Bloomberg notes the metaverse could represent an $800 billion market. 67% of those surveyed believe the metaverse will take off in the next 5 years.

It’s not all good news, though. For example, there are some serious potential cybersecurity threats; household names like Microsoft, in fact, have recently outlined important security cornerstones. What’s more, 29% of American adults still don’t understand what the metaverse is.

Thus, in this article, we look to dive headfirst into the metaverse, explain what exactly it is, how it came to be; and finally, critically, what construction business owners may make of the metaverse.

Metaverse Definition: What Is the “Metaverse” and How Does It Work?

A straightforward metaverse definition is hard to come by; you may define “metaverse” as a virtual-reality space, where users interact with computer-generated environments and other users. The word itself is a melding of the terms meta and universe, literal in its description of creating authentic reference of the world around us through virtual representation. On the other hand, meta also comes from the Greek word for beyond, which implies moving from the real-world into another realm; moreover, a branch of philosophy known as “metaphysics” refers to transcending reality; that is to say, it studies abstract theory with no basis in reality.

Oftentimes, metaverse definitions are prefaced by contingencies like “(in science fiction)” or “theoretical,” and describe a shared, realistic, and immersive computer simulation of real-world experiences, in which people take part as digital avatars. In fact, the term was originally coined by Neal Stephenson in his 1992 science fiction novel, Snow Crash. Many of Stephenson’s predictions (such as the VR headsets used to become fully immersed in the simulation) have come true.

And while still in part theoretical, tech companies believe the metaverse to be the future of the internet; when asked a question like, “what does metaverse mean?”, then, these companies may thus offer a response like, “an emergent, networked online space with digitally persistent environments that people inhabit for synchronous interactions and experiences, accessing shared virtual space through VR, augmented reality, game consoles, mobile devices, or conventional computers.” Finally, as offered up in Wired, substituting “metaverse” for “cyberspace” may be a simple, if accessible, colloquialism most of us can grasp.

The Internet: A Brief History

Understanding claims like “the metaverse is the next era of the internet” relies on understanding the internet as it is today, and where it came from, in relation to what’s coming.

The earliest computers of the 1960s were bulky and voluminous enough to fill entire rooms, bringing the advent of the internet out of sheer necessity; government researchers needed to share information with each other, from one computer to another, rather than having to physically travel to the site of each computer. 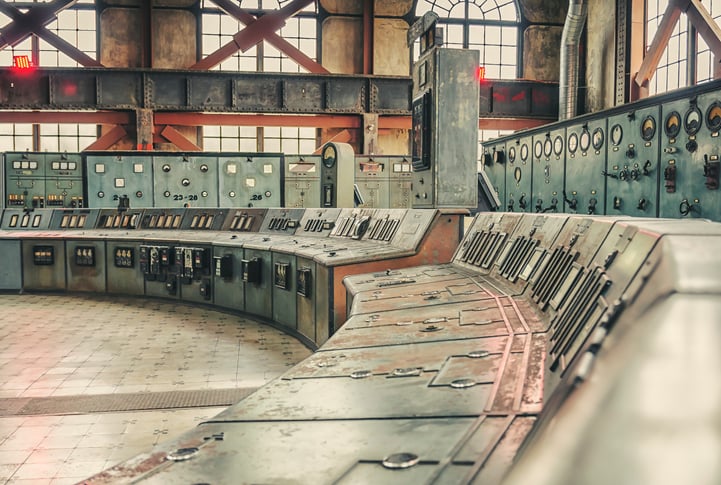 Further, the Soviet Union’s launch of the Sputnik satellite motivated the U.S. Defense Department to consider ways in which information could be disseminated even after a nuclear attack, eventually leading to the formation of Advanced Research Projects Agency Network (ARPANET), the network that ultimately evolved into what we now know as the internet. Fun fact: January 1, 1983, is considered the official birthday of the internet. Prior to this date, computer networks had no standard way to communicate with each other.

Fast forward to 1989, Tim Berners-Lee, a British scientist, invented the World Wide Web (www) while working at the European Organization for Nuclear Research (CERN), initially to meet the demand of automated information sharing between scientists in universities and institutes around the world. You can still today access Berners-Lee’s original proposal, within which he describes a user interface where hypertext documents can be viewed by “browsers.” 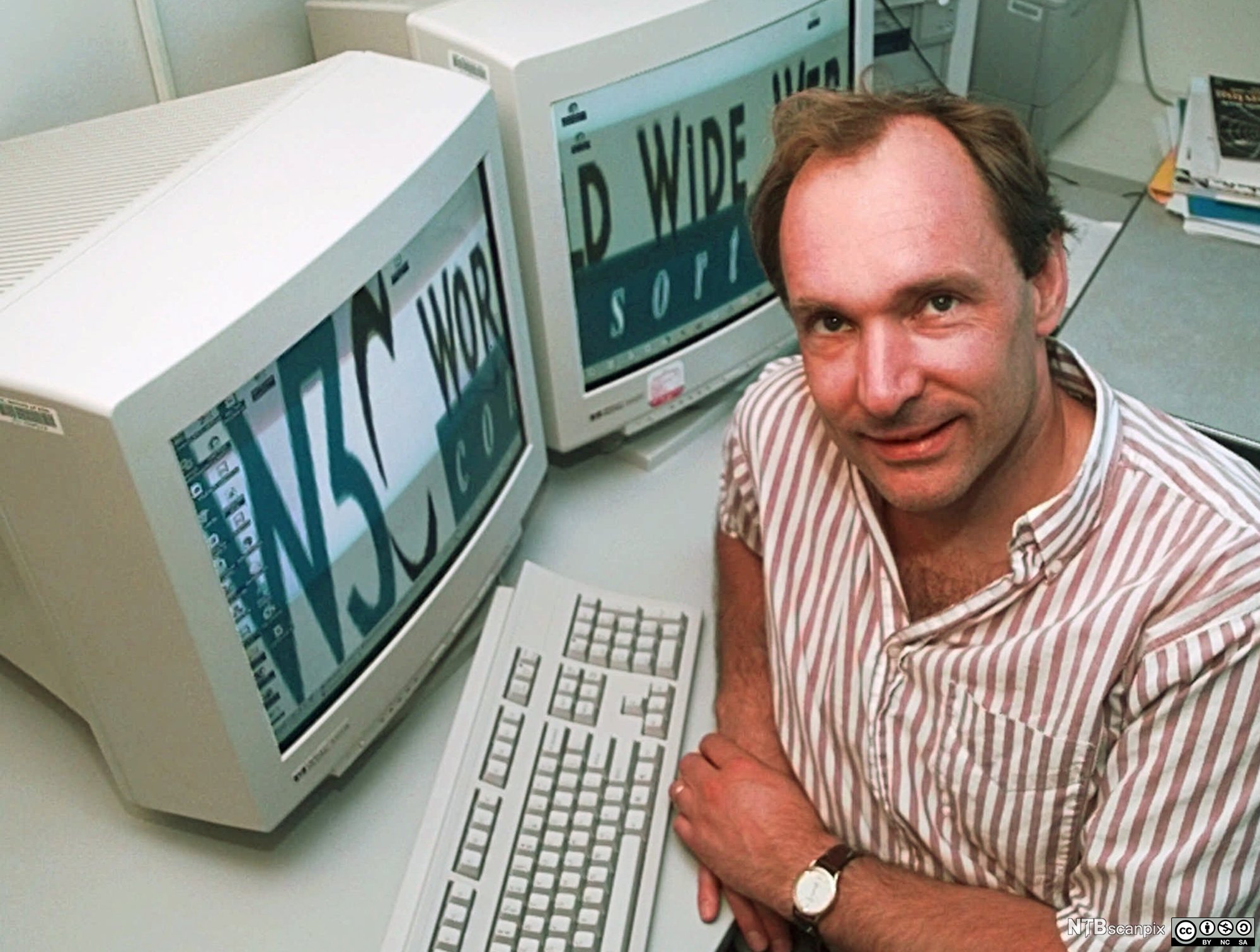 Pictured above: Tim Berners-Lee, the inventor of the world wide web.

Soon after, communication protocols allowed for email, newsgroups, and chat to come, followed by web browsers (among the first and long since retired, Microsoft Internet Explorer and Netscape), and Uniform Resource Locators (URLs) which enabled modern users to “surf the web,” while search engines brought a vastly superior way to index the ever-expansive open web and make it easier for average users to access and find information faster.

In the 2000s, personal websites have become more common; hard drives appeared and took over from floppy disks, while the sheer volume they store (from megabytes to gigabytes to terabytes) and magnitude users create continues to grow exponentially (as big data looms). 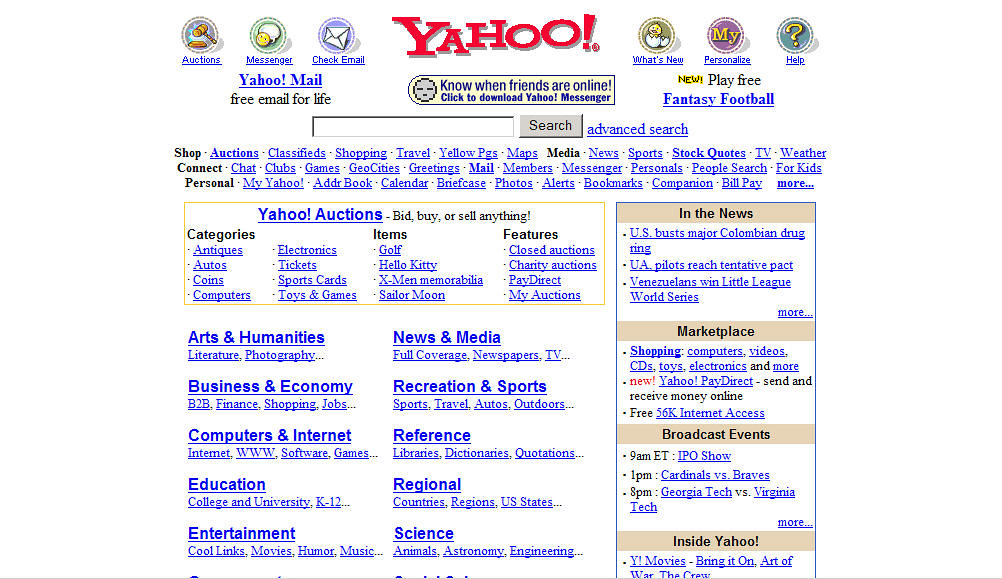 Pictured above: Screenshot of Yahoo homepage in the year 2000. Source: Flickr

The release of smartphones and mobile apps, and other inventive hardware products (e.g., laptops over desktop computers, blurring the lines between “notebook” and tablet device) serve to facilitate a completely new way to access the internet; widespread 4G and Wi-Fi give users, once tied to a desktop machine (although it didn’t fill the entire room!) the convenience of accessing the internet on the go. 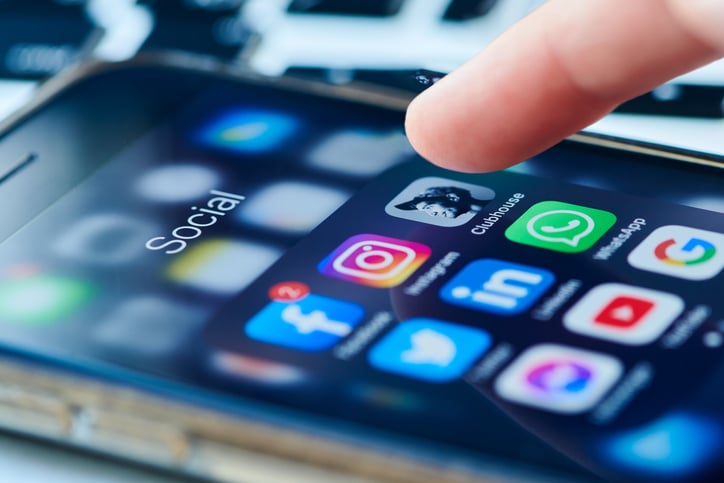 Website designs, which some 20 years prior were showy and full of flash animation, had to quickly shift to be responsive to all devices, and in fact, websites should now be developed first with mobile front-of-mind.

The Next Era in Internet, the Metaverse: Fully Immersive

Now that we have the context of where the internet came from, we can start to understand the idea of the metaverse. 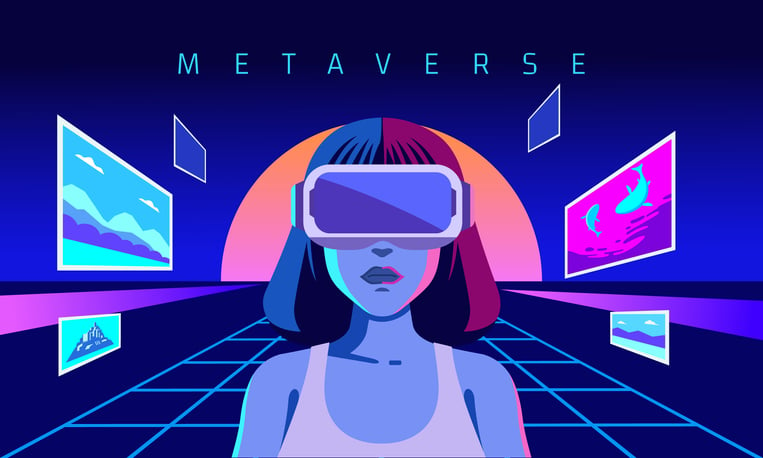 In the early days of the internet, miraculous technology connected computers together via a central network. Enter web browsers and search engines, where people were able to access information. The global internet allowed new ways for people to connect with each other, and mobile devices helped facilitate connection from anywhere.

Consider, for example, how the recent global pandemic caused millions of Americans to work from home. Without tools like Microsoft Teams, Zoom, Google Docs, and SharePoint, we would have been isolated and completely debilitated both socially and professionally; technology facilitated a new paradigm in remote work.

Proponents of the metaverse might tell you that technology in the metaverse doesn’t merely allow users to work from wherever they want; immersive tools facilitate teamwork and empower employees to be productive and collaborative in ways remote work simply couldn’t offer before.

So, is the metaverse real?

That depends on your interpretation of reality. A defeatist trying to be completely literal might suggest the metaverse is nothing more than a sadder, more immersive version of Dwight Schutte’s Second Life, where users can become further removed from reality. And that’s definitely a concern, 47% of surveyed fearing “addiction to simulated reality.”

But there are some genuine use cases to the metaverse.

Metaverse Examples: What Is the Metaverse Used For? 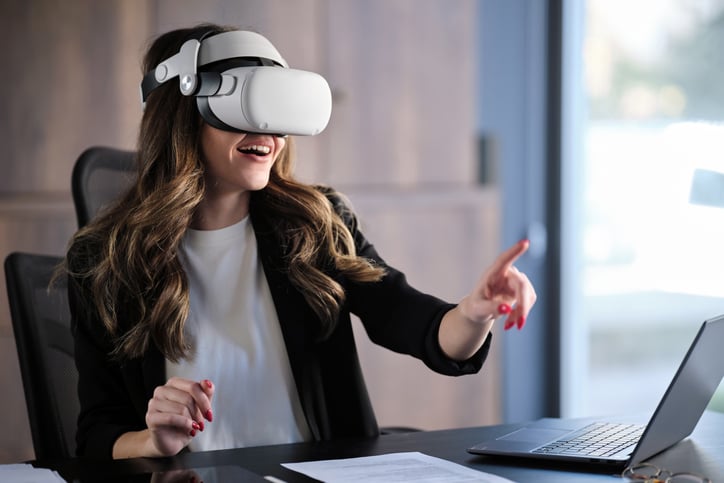 Of business sectors worldwide who have already invested in the metaverse as of 2022, construction represents 5% of the whole, amazingly ahead of other industries like manufacturing and the creative arts that arguably have use cases in the metaverse.

The following represent construction applications in the metaverse: 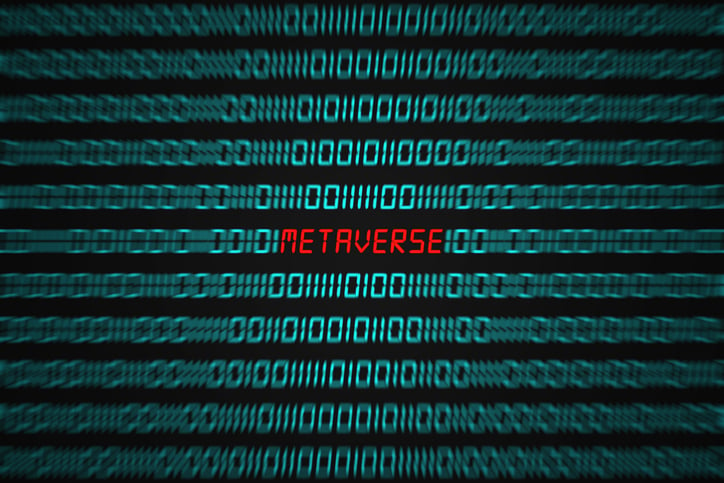 The metaverse is coming. It’s hard to stop a moving train.

Just as Tim Berners-Lee expressed concerns about the world wide web 30 years later, the next era of the internet is likely to surface as many new problems as the technology will bring great innovations and progress to how humanity is able to interact with each other and grow together.

We must, as Microsoft suggests, work tirelessly together to secure it.